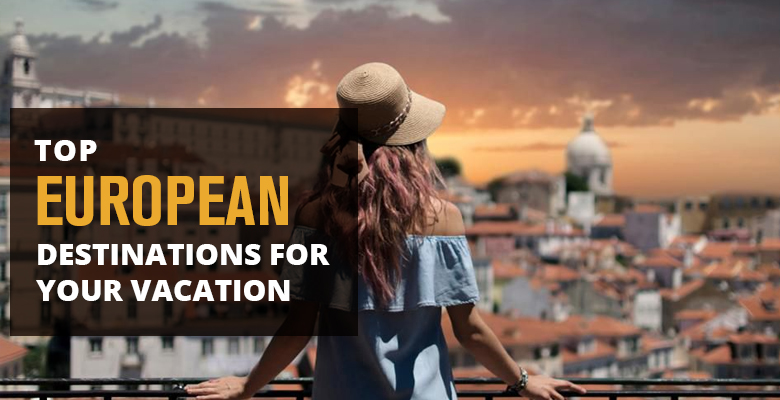 Best places to visit in Europe during Holidays

Best places to visit in Europe are spread across the whole continent. A land full of history, culture, natural beauty, the unique cuisines, locals, Europe is a traveller’s paradise. And although Europe is the second smallest continent, it is still the home to 11% of the Earth’s population.

The birthplace of Western civilization, Europe has fifty sovereign states of which the Russian Federation is the largest. The continent of Europe is located entirely in Northern Hemisphere and extends mostly to Eastern Hemisphere. With Asia on its East, the water bodies that surround this continent are the Arctic Ocean to the north, the Atlantic Ocean to the west and the Mediterranean Sea to the south.

Europe is a beautiful destination and the best time to travel depends on one’s personal preference. Summer in Europe is from June to August. Therefore, this time the temperature remains warm for most parts except for Mediterranean coasts where it’s hotter than the rest.

The autumn season is from September to November. This time the temperature is cool and pleasant with occasional rains. Also, it remains less crowded in this season. Winter in Europe is harsh though full of festivities. The months from December to February experiences snowfall and biting cold weather.

The months of March to May are spring season. It’s neither too hot, nor too cold and is in one word perfect. Southern Europe is the best place to visit during this time.

The cultural diversity in Europe is highest in the large urban regions like Central Europe, Benelux, Scandinavia, Northern Italy, Southern UK and some Mediterranean coastal areas.  However, diversity is lowest in less populated areas and Eastern European regions.

The culture in the European nations has its roots in a common heritage. The Greco-Roman antiquity, Christianity, Judaism, the Renaissance and its Humanism, the political thinking of the Enlightenment, and the French Revolution, and the developments of Modernity, including all types of socialism all contribute to the present day culture of Europe.

Although Christianity is the largest religion, secularism is also present in Europe. And Islam is the fastest growing religion covering predominantly Eastern Europe. Of the 24 officially recognized languages in Europe, English is the most popular one followed closely by French.

Located in Western Europe, France consists of medieval cities, alpine villages and Mediterranean beaches. The capital city Paris is a hub for the top class fashion houses along with classical art museums and monuments like Eiffel Tower. France is one of the best places to visit in Europe with over 89 million visitors a year.

The friendly inhabitants, relaxed lifestyle, cuisine and the vibrant nightlife makes Spain one of the best holiday destinations Europe. Rich history, folklore and festivities form the core of the Spanish Empire. The splendid cities, coastas, small villages and islands all combine to form the Spanish diversity for a tourist.

Italy has the most number of UNESCO world heritage cultural site than any other country. The birthplace of the Renaissance and the centre of Roman history, Italy is full of cultural beauty all around. Apart from its culture, the picturesque landscape also draws countless number of tourists all year round making it one of the best places to visit in Europe.

A sovereign country in Northern Europe, the United Kingdom consists of England, Scotland, Wales and some part of Northern Ireland. The best part about this place is that it is suitable to visit the United Kingdom any time of the year. As the climate is relatively temperate it rarely experiences any extremes. However, spring and autumn are better because it remains warm and dry.

The best places to visit in United Kingdom are: London, Edinburgh (Scotland’s capital), the city of Bath, Stonehenge and Medieval Salisbury, the historic town of Windsor, the rustic countryside of Cotswolds, York and its famous church York Minster, the University of Oxford and Cambridge, Manchester, Liverpool, Canterbury, the capital city of Wales: Cardiff, Loch Ness and Inverness.

Located in Eastern Europe, Turkey has cultural connections to ancient Greek, Persian, Roman, Byzantine and Ottoman Empires. Summarising, it presents a curious mix of the west and the east, therefore, making it one of the best places to visit in Europe. . The majority of religion here is Islam. However, Turkey officially remains a secular country, with no declared state religion.

With really hot summer and cold winters, the transition seasons of spring (April- May) and autumn (September-Mid November) are the best time to visit Turkey. The places that are worth visiting are: Ankara, Mardin, Konya, Antalya, Marmaris, Side, Bodrum, Ephesus, Cappadocia, Istanbul.

This Western European country is full of beautiful scenery. Starting with landscapes of forests, rivers, mountain ranges and North Sea beaches, Germany has it all. The capital city of Berlin is full of vibrant nightlife and art and is one of the best places to visit in Europe. In addition to all the other, Germany is also the hotspot for the history lovers, housing many sites related to World War 2.

Some of the must-visit places in Germany are Berlin, Munich, Heidelberg, Nuremberg, Cologne, Hamburg, Rothenburg ob der Tauber, Bamberg, Frankfurt, Dresden. May to September is a good time to visit Germany. Although, the months of July and September are comparatively drier.

This is the land with one of the highest living standards of the world and also one of the best places to visit in Europe. Austria is the home of Mozart and waltz. It presents a medley of sparkling alpine lakes, majestic mountains, and elegant cities, with a rich cultural heritage.

The best places to visit in Austria are: Vienna, Salzburg, Salzkammergut, Innsbruck, Zell am See, Wachau, St Anton am Arlberg, Graz, Worthersee, Bad Gastein. The best time to visit Austria is between April to May in spring and between September to October in autumn.

Located in South-eastern Europe, Greece contains thousands of islands throughout the Aegean and Ionian seas. The capital of Greece, Athens contains landmarks dating back to the 5th century BC. Well known for its scenic beaches to party resorts, Greece is one of the top European destinations for travellers.

Late April to early November is the most suitable time to visit Greece. May to October has lots of sunny weather, while, July and August are the hottest months. The best places to visit in Greece are: Santorini, Mycenae, Halkidiki, Skiathos, Olympia, Skyros, Nafplio, Corfu, Knossos, Zakynthos, Rhodes, Meteora, Delphi, and Athens.

Croatia is full of natural beauty and rich cultural heritage. Officially, the Republic of Croatia, this country is at the crossroads of Central and Southeast Europe, on the Adriatic Sea. This country is packed with historical sights, national parks, dense forests, beautiful waterfalls and scenic lakes. In recent years, Croatia is among top choice of tourists thereafter making it one of the best places to visit in Europe.

The best time to visit Croatia is in May and June or September and October when the weather is pleasant and sunny. This is the ideal time for swimming and sunbathing. The best places to visit are: Dubrovnik, Hvar, Plitvice National Park, Split, Rovinj, Zadar, Pula, Korcula, Zagreb, Krka National Park.

The mountainous Central European country of Switzerland is home to numerous lakes, villages and the high peaks of the Alps. Unparalleled natural beauty makes Switzerland one of the best holiday destinations in Europe. Ski resorts and hiking trails are widely popular. In addition to this, the country’s production of Swiss watch and chocolate are world famous.

The best places to visit Switzerland are: Matterhorn in Zermatt, Chateau de Chillon in Montreux, the Jungfrau region, Swiss National Park in Zernez, Lake Geneva, Lugano, Bern, Lucerne, Rhine Falls, and Zurich. Although the best time to visit Switzerland is summer, it is beautiful in every season all year round.

To know more about travel and latest technology check here.