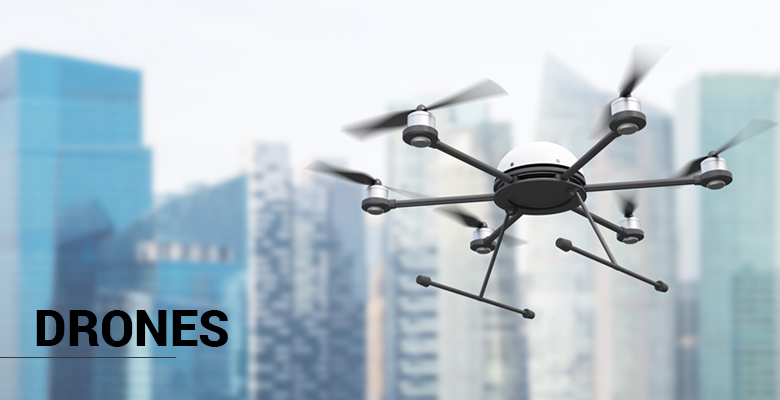 Drone or unmanned aerial vehicle (UAV), is an aircraft without a human pilot abroad. They are remotely controlled or can fly autonomously with the help of Artificial Intelligence or AI. Usually, in this case, they work with GPS or Global Positioning Service. Technology has come a long way in 2019. In the present day, drones are a usual thing, nothing surprising. They are a part of the time that we live in. Originally the invention of a drone was for military purposes. It helped in missions which were too dangerous for humans. But at present civilian drone outnumbers the military ones by far. Apart from the military, the usage of drones is expanding to other sectors like commercial, scientific, and recreational. Agricultural and more. Drones can also help in special activities like surveillance, product delivery, and aerial photography.

The first drone dates back to the early 1840s. It was during that time when Austrian soldiers attacked the city of Venice with explosives-filled unmanned balloons. But this feat was not entirely successful and thus not used any further.

The period of World War 2 and the Cold War led to many technological advancements. And as a result, the production and usage of drones increased. But even at this time, it was restricted to military usage only. Based on a report that the Wall Street Journal published, the usage of non-military drones began in 2006. Government agencies owned these drones and used for purposes like disaster relief, border surveillance, wildfire fighting. Other corporations started using drones for inspecting pipelines and spraying pesticide on farms. Federal Aviation Administration (USA) issued the first commercial drone permit in 2006. With time, the number of permits for drone usage increased considerably.

In fact, the popularity of drone is so high that it has led to a dedicated sport: drone racing. FPV (First Person View) drone racing is where participants control drones equipped with a camera and wear head-mounted displays showing live stream camera feed from the drones. To win the air racing, one has to complete the set course as quickly as possible. This racing first started in Australia in late 2013 and since spread worldwide.

Based on functional categories drones or Unmanned Aerial Vehicles are classified into these popular categories:

Depending on the number of wings or rotors, there are 3 types of drones.

While drones contribute a lot in researches, rescue missions and the development of the world, there are also many adverse effects of it.

Drone strikes are one of the most popular yet double edged tool which has many side effects. These attacks affect the environment and public health to a great extent. They de-stabilize regional economic and political condition. The damage is at par with aerial missile attacks. The chemical content and residue left from these strikes, harm agriculture, public health and cause numerous skin and respiratory diseases.

Apart from these air attacks, the usage of drones also lead to invasion of privacy, interference with air activity, storage of weapons and many other illegal activities.

To know more about many other latest and cutting-edge technologies check here.